As the ALLSTARS bus pulled up to the Sangoa Football Club complex just outside Beijing the heat was still climbing to its to peak, Beijing was hiding behind a layer of thick smog and the ALLSTARS looked weary. It was as if everything had hit them all at once, 4 games in 5 days, 100plus degree temperatures, walking most of the tourist attractions in Beijing and a diet which wouldn’t find its way into any modern day sports manual. The boys were still positive and eager to lace up against the neighbours from across the corridor. Coach Donovan and myself put them through the warm up, preparing as we had every other game. Adjacent to us on warm up field number 7 were the Jakarta Select, waming up in the only way they knew how, with a smile and a bounce doing what can only be described as a school yard game holding hands in a circle then sprinting to the fence racing other team mate. In stark contrast to the opposite side of the ALLSTARS which saw the Korean High School select preparing with very precise movement patterns, each player seemingly a carbon copy of the one before him. A wonderful notion of what this tournament has been all about, the contrasting styles of Soccer nations on display side by side in competition and in friendship. 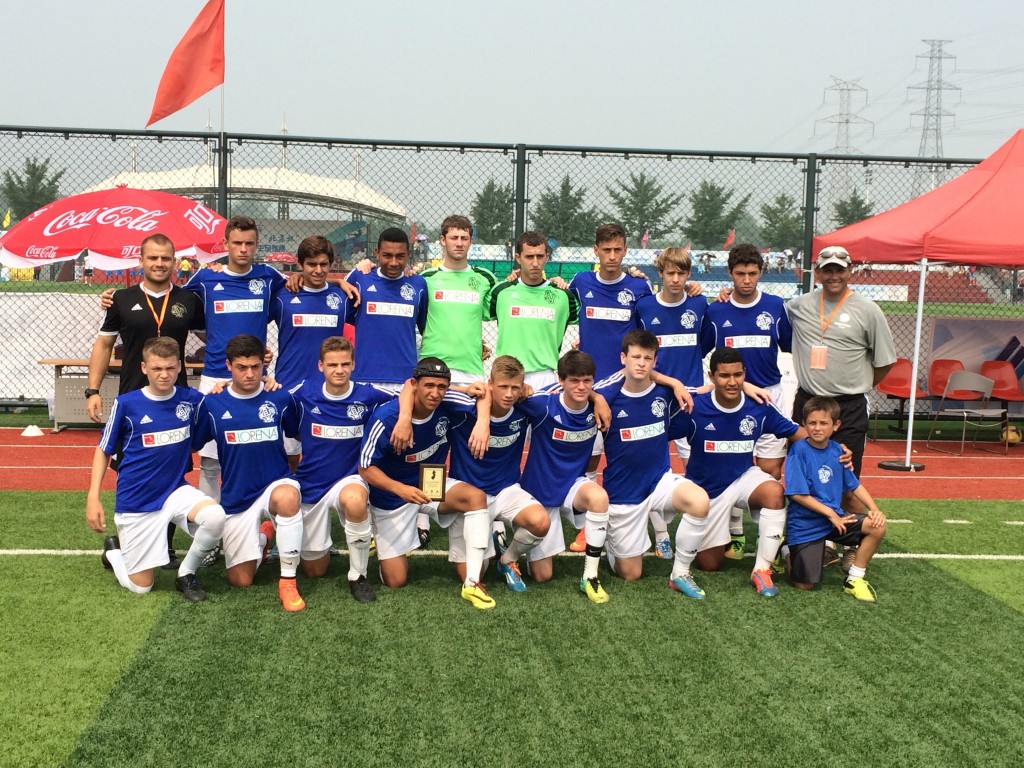 Semi-finals here we go. We parents and fans taking shelter from the baking heat the NJ ALLSTARS took to the field ready to take on Indonesia’s best Soccer players. The southeast Asians started out very bright and attacked with an injection of speed that we hadn’t seen from other teams in the tournament. They moved the ball well looking to attack down the left side isolating Aunger on a number of occasions. Bizub replied on the right hand side for the Americans causing problems with his blistering pace. The first real chance fell to Panizza with a spectacular attempt at a bicycle kick going just wide of the far post. Again Jakarta played with speed and pace testing Golden and Lowe through the middle, which they matched superbly. Leaving space in behind their midfield prompted the ALLSTARS to counter quickly constantly drawing the midfield further and further apart, which in turn was leaving more space for the Asians to exploit. For the first time in the tournament we weren’t possessing the ball well and were being drawn into a game of speed which we were not going to win. With the run of play it didn’t look long before a breakthrough would arrive and as one ball was cleared from the NJ area it dropped to the Jakarta left full back who touched the ball out of his feet a hit a lazer of a shot that fired from 35yards on the left hand side all the way to the right side upper 90 leaving no chance for Kaminer in the goal. Jakarta took more and more control of the ball with the ALLSTARS seemingly unable to get into any sort of rhythm until the final moments of the half.

40 minutes, with a place in the final at stake. New directives and a fresh input had the NJ ALLSTARS back at it for the second half, Fabricant leading the charge on a number of occasions driving, spinning and bumbling his way passed players, anything he could do to get forward. More and more combinations began to appear with the midfield looking to get hold of the ball with Bell, Bull and Hadley combining to set Bednarsky and Zapata free on either flanks. Finally 60 minutes into the semi final and it seems as if we have woken up with a clipped shot from Panizza spinning off the outside of the post. Corner to the Americans and its a driven ball right underneath the crossbar which is risen to and met by Captain Jack Lowe, GOAL…….no, freekick to the Indonesians. With the goalie lying on the ground in a heap, I don’t condone players arguing with referees decisions, however that was never a free kick. A very clean jump straight up by Lowe with eyes on the ball all the time, a hard one of the boys to take only made more difficult by the Indonesian left footed number 7 going up the other end and sticking one in the top corner 2 minutes later, 2-0 Jakarta.

With 12 minutes to go in the 105 degree heat the referee called for a water break, Coach Donovan promised his team they would get at least two more chances. 30 seconds pass and Panizza is put through on goal after a sublime ball from midfield only to be denied by the outstretched boot of the goalie. Next its Lowe in a good position after a corner is headed back across goal only to see his effort come off the crossbar and the ensuing scramble blocked on the line. This time its a long throw with Lowe hitting the woodwork again before Hadley has a shot cleared off the line. A couple more than the 2 Donovan had projected. The ALLSTARS continued to press looking for a goal without prevail.

A thoroughly disappointed group of young men trudged off the turf following the game, tired and outplayed. The teams lack of conversion in front of goal had cost them in a game in which they hadn’t played their best but could have easily come out on top of. It wasn’t without effort or desire, more an accumulation of tiredness which left the boys half a step short and a second too slow all over the field.

We ended today with a team meal, players, coaches, parents, family and travelling fans taking a little time to be thankful of the opportunity the experiences and the chance to finish strong going for the bronze on day 9.